On 8 November 2016, the prime minister of India, Narendra Modi, announced the demonetisation of all ₹500 and  ₹1,000 banknotes of the Mahatma Gandhi series

The government asserted that the demonetisation would cut down the use of counterfeit cash, which funds illegal activities. As a result of this sudden announcement, there were sustained cash shortages causing a widespread slowdown in the Indian economy. The Indian Stock Exchange fell by 6%. In addition, the people looking to exchange their old notes to the newly issued  ₹500 and ₹2000 banknotes had to wait in lengthy lines. People argued that the demonetisation was poorly executed, and was linked to several riots across India. By late August 2017, 99% of the banned currency was collected by banks. But how did the demonetisation affect the Indian economy?

The large sums of black money in India had a net negative impact on the economy. It created a dual economy – “The existence of two separate economic sectors within one country, divided by different levels of development, technology, and different patterns of demand.” This unreported economy, where huge volumes of transactions were taking place, made it difficult for the government to create and analyse the effectiveness of their policies. Vital macroeconomic factors such as saving-to-income ratio and factor income levels were not accurate. As a result, estimates of economic development reports in India, to some extent, were guesswork. Demonetisation helped by limiting the use of black money, shrinking the dual economy and aiding the government in formulating correct policies.

Tax evasion was a huge problem in India when black money existed. Tax evaders would not pay the appropriate income tax and would store their saved money in ₹500 and  ₹1,000 banknotes. However, when this new scheme was introduced, people had to disclose their income to the bank if they wanted to get the newly issued notes. As expected, a greater amount of the population paid taxes. The Central Board of Direct Taxes concluded that there was a 41.79% increase in direct tax collection in the following year. “About 9.1 million new taxpayers have been found, significantly expanding the taxpayer base,” a senior government functionary said on condition of anonymity. 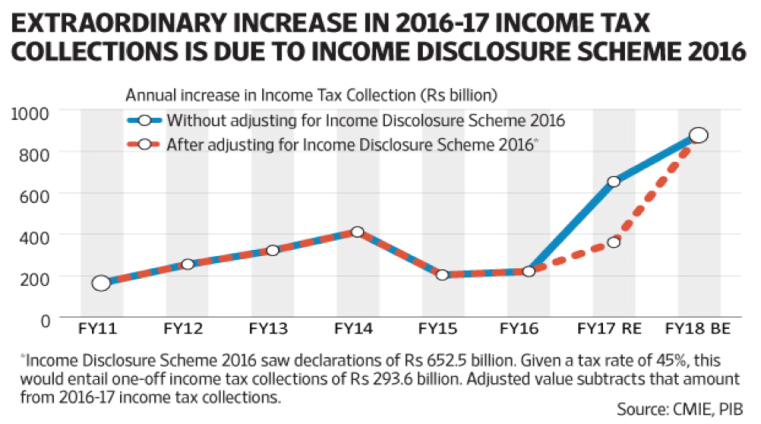 Furthermore, with a decrease in tax evasion and a substantial increase in government tax revenue, the government is now able to spend a larger volume on improving merit goods such as education, healthcare, and infrastructure. In the 2017 budget, the Finance Minister announced an allocation of Rs 72,394 crore compared to Rs 68,963 crore for last year, which is 4.9% increase in the education budget. In theory, this should improve the quality of schools as better qualified teachers can be hired and the level of school resources can be enhanced. Students will learn better, perform higher leading to a greater number of youths going on to higher education. In the long run, unemployment rates will be lower as there will be a greater number of graduates actively seeking employment. Overall, this has a net positive effect on the economy and society.

However, Indian Express stated, “…if you consider inflation and GDP growth rate, education budget may come down to lower than the last year allocation (as % of GDP). Even after this increased allocation, education sector budget remains far from the recommended 6% of GDP.” Time will only tell whether the increase in government spending on the education sector will be a useful investment.

Income inequality in India has always been a pressing issue. According to Oxfam, the “the richest 1% own 58% of total wealth in India.”

The top 10% hold almost 340 times more wealth than the bottom 10%. The Indian government needed a countermeasure for this widening gap between classes; they thought the demonetisation would be that solution. The poor in India typically hold their wealth in cash. The relatively poor – people who earn less than 40% of the average income – are generally the debtors, whilst the rich are the lenders. The demonetisation caused a decrease in inflation which meant the borrowers were affected negatively. Transferring the relative wealth from the poor to the rich, widening the gap, demonstrating the demonetisation might have had an adverse effect on the economy.

However, with an increase in government expenditure in the economy the per capita gross national disposable income of Rs 118,395 compared to the per capita gross domestic product of Rs 116,888, indicates a silver lining. Even though the demonetisation didn’t have a direct effect on income equality, indirectly it had a spill-on effect.

Despite many benefits, the major disadvantage was the disruption to trade. It takes time for both consumers and suppliers to understand the new system. As a result, less economic activity was taking place causing the GDP to fall to a 3 year low of 5.7%. In the short-run, GDP growth will slow down as there is an exogenous shock to the economy, but it will start to rise when people adapt. The demonetization has had an initial impact of inconvenience, chaos, and disruption. However, as time progresses, the economy will benefit and the Indian society will be a more prosperous nation.