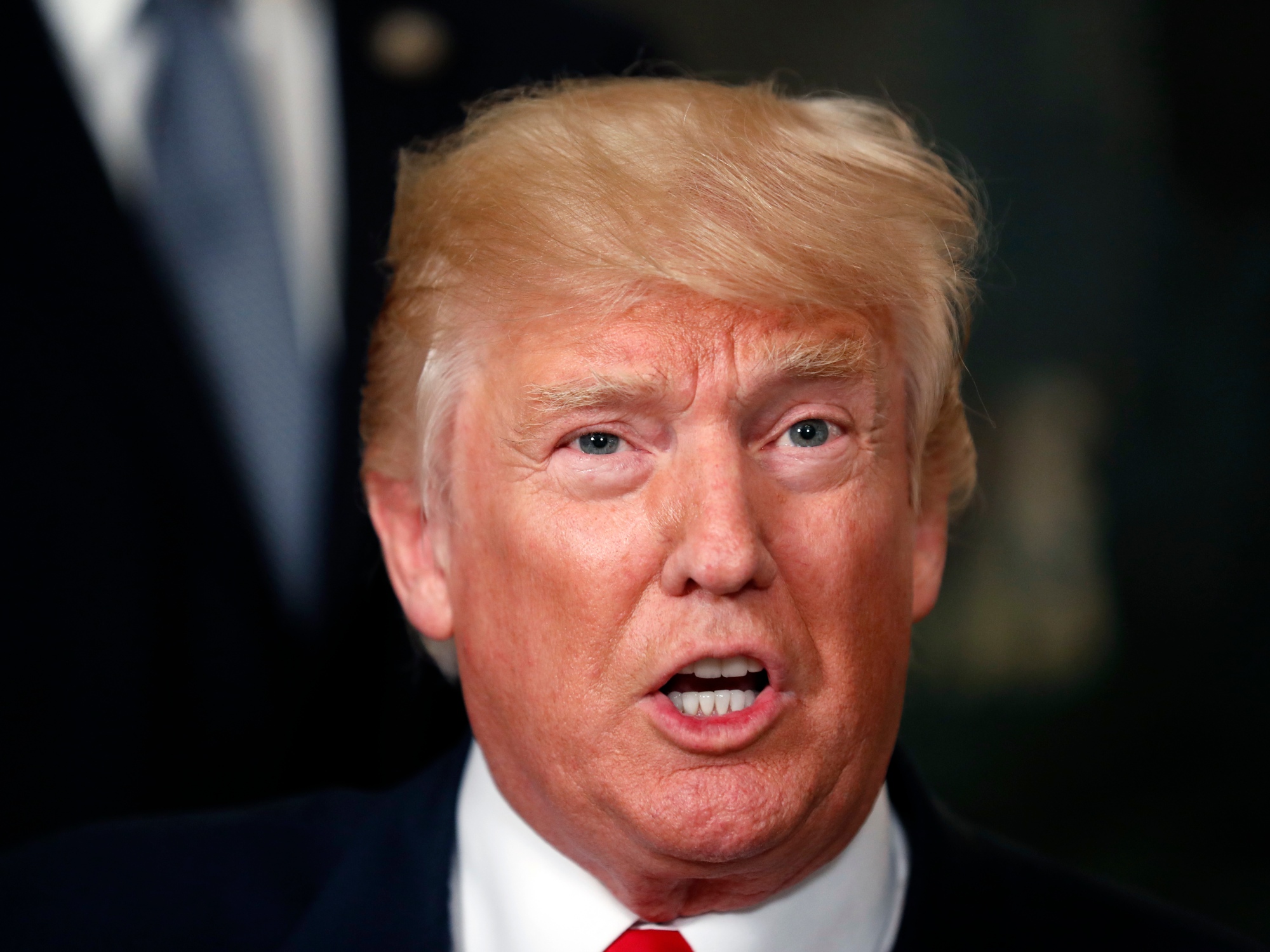 “Few propositions command as much consensus among professional economists as that open world trade increases economic growth and raises living standards.” – Nicholas Mankiw, the Robert M. Beren Professor of Economics at Harvard University, once said of free trade. Although this view has been adopted by an overwhelming majority of economists (including Adam Smith himself), it has not experienced popularity among the Western electorate in recent years. Populist movements in Europe, exemplified by Marine Le Pen, and in the US, by Donald J. Trump, have tapped into a deep-seated anti-globalisation and, by extension, anti-free trade sentiment. This essay argues against the accusations hurled at free trade by populist politicians and addresses the many misconceptions held against free trade policies.

First, we must examine what free trade is. Free trade occurs when goods and services are traded between countries without the use of import controls, such as tariffs, import quotas and local content requirements. Genuine free trade exists only in the absence of any trade policy that discriminates against imports from and exports to foreign nations. No country is in a genuine free trade agreement with any other country. Therefore, a small degree of protectionism is assumed whenever free trade is referred to in this essay.

The main argument put forward against free trade is that it increases unemployment. According to a 2014 Pew Research poll, 50% of US and 49% of French citizens regarded trade liberalisation as destructive of employment. These concerns stem from the following reasoning: removal of trade barriers will increase the already strong price competitiveness of imports from nations where labour costs are lower; this will undermine profitability of domestic producers through the loss of domestic market share; as a result, they will be forced to cut their costs of production, usually by moving their operations to a developing country, leading to a loss of jobs in the developed economy. Manufacturing is the sector which best illustrates the detrimental effects of free trade policies adopted in the UK and the US. Professor John Van Reenen of the LSE has concluded in a recent paper that “competition from Chinese imports explains 44% of the decline in manufacturing employment in the US between 1990 and 2007.” This phenomenon is illustrated in Figure 1. In the UK, The Economist reports that the last decade has seen the number long-term unemployed increasing “much faster in areas where manufacturing makes up more than 20% of the local economy than in areas where it makes up less.” According to Newsweek, “NAFTA-related job losses in the US ranged from 60,000 to 190,000” annually. Clearly, data does support the argument that free trade increases unemployment in sectors such as manufacturing

FIGURE 1: Import Penetration Ratio for US Imports from China (left scale), and Share of US Working-Age Population Employed in Manufacturing (right scale) 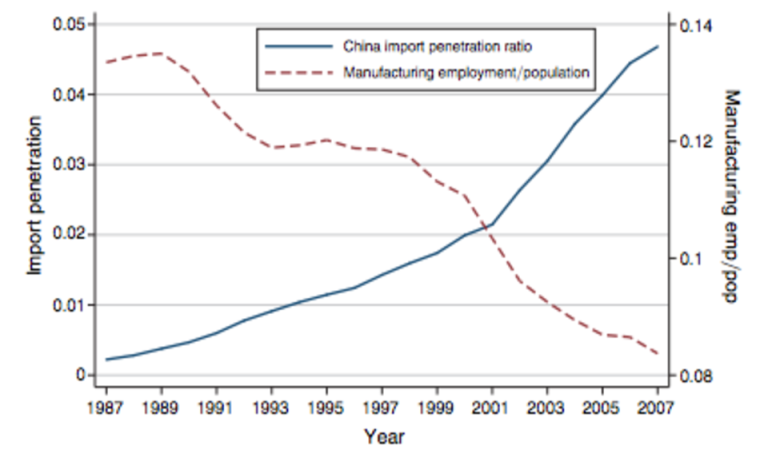 Nonetheless, free trade leads to an increase in aggregate employment. Even if we assume the higher bound of annual US job losses from NAFTA, this number dwarfs in comparison to the number of jobs created in the US since NAFTA was signed – 34 million jobs. Much of this job creation is attributed to free trade increasing allocative efficiency – redistributing resources from inefficient sectors to more efficient ones. For example, Newsweek asserts that tariffs currently imposed on steel imports in the US, aimed at protecting the domestic steelmaking industry, “increase costs in steel-consuming industries, which employ 13 million Americans, compared to the less than 2 million employed in the steelmaking industry.” Lifting these tariffs would decrease employment in the steelmaking industry but would lead to an even more significant increase in employment in the steel-consuming sector by reducing its cost of production and so allowing the industry to expand; this would represent an aggregate increase in employment. By way of illustration, the World Economic Forum is expecting unemployment in Canada and Japan to fall by 5% because of the Transpacific Trade Partnership.

Another argument put forward against free trade is that it increases income inequality. The Economist attributes the rise in regional disparities in the UK in the last decade to an increase in unemployment caused by foreign manufacturing competition. The journal reports that “the ratio of the output per person in Britain’s three richest subregions [mostly financial services, in which the UK is a net exporter] and the three poorest [mostly manufacturing, in which the UK is a net importer] increased by 25%.” Moreover, even if a worker does manage to keep his job, free trade puts downward pressure on their wages. The bargaining power of employers increases as they hold the possibility of moving their operations to another country over their employees’ heads, discouraging them from asking for wage raises. This is especially true for low-skilled jobs, as they can most easily be outsourced. Only this year, Carrier, maker of HVAC systems, announced its plan to cut 1400 manufacturing jobs in Indianapolis and move them to Mexico. This attempt was stopped by an undisclosed financial agreement between the Trump administration and Carrier, illustrating how much bargaining power Western companies accumulated because of free trade.

While free trade might put downward pressure on wages, the alternative – protectionism – is even worse for low-income earners. In the US, most consumer goods are subject to higher tariffs than more expensive products of the same type. Unsurprisingly, Americans on low incomes spend more of their salaries on cheaper goods. Consequently, they suffer more from protectionism than higher income earners, which contributes to record levels of inequality in the US (Figure 2). 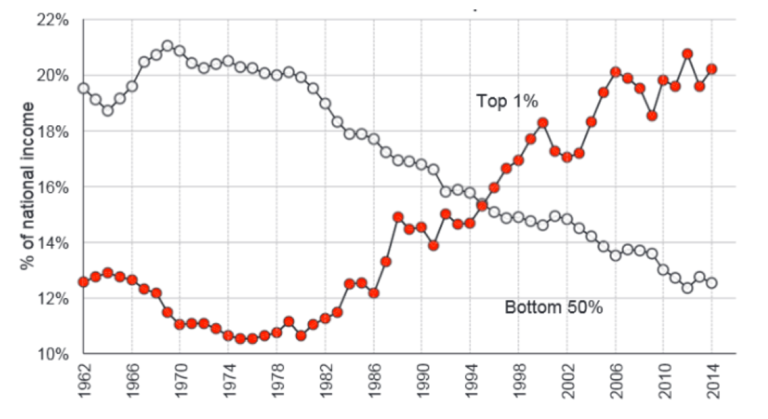 On top of this, protectionist policies lead to special treatment of specific industries due to regulatory capture. More prominent industries are favoured under protectionist systems as they have more resources to influence their regulators. As a result, these industries end up being protected from foreign competition, profiting their already wealthy owners. Evidently, trade liberalisation is not the cause of rising inequality in the West: it is the fault of government redistributive efforts. One example of this is Argentina. Critics of free trade often cite the fact that in 1990-2000, trade liberalisation policies adopted there were closely correlated with increases in poverty. However, they fail to account for massive unproductive public spending that took place in the same period of time – a more probable cause. When governments do invest into redistributing benefits of globalisation, free trade is a powerful catalyst for reducing inequality by increasing aggregate employment. For example, in China, which joined the WTO in 2001, the number in absolute poverty “has fallen by 200 million since 1978”, by the World Bank estimates.

Free trade increases both consumer and producer welfares. It undermines the market power of domestic oligopolies by opening the market to foreign competition, making it harder for oligopolies to collude and exploit their consumers for profit. Additionally, consumer welfare is increased due to an expanded degree of choice and lower prices that come with increased international competition. According to The Economist, in the US “prices are held down by more than 2% for every 1% share in the market by imports.” Two economists, Lindsay Oldenski and Theodore Moran, have calculated that in 1973, adjusted for inflation, 34% of the median household annual income in the US was spent on industries “most exposed to trade competition” (e.g. textiles); in 2013 (after the USA signed NAFTA and China joined the WTO), this spending “declined to 20%”, even though the total volume of goods purchased from these industries increased. This means that an average household has saved $8,156 of their annual income thanks to lower prices brought about by free trade. In contrast, protectionism hurts consumers by shielding producers from competition and maintaining higher prices. One example of this is the Agricultural Act of 2014, aimed at supporting American farmers. Under the act, the surplus agricultural produce is bought by the government to sustain pre-determined prices. This is not only a drain on taxpayer’s money, but it also encourages inefficient farming practices. In fact, most producers benefit from lower prices brought about by free trade; it helps them cut their spending on capital input purchases and, as a result, cut their costs of production. The Bureau of Economic Analysis has calculated that “at least half of US imports are not consumer goods…they are inputs for US-based producers.”

It is a common misconception that free trade only benefits net-exporting countries. Free trade is actually beneficial to both: net-importers and net-exporters. Professor Nick Crafts of Warwick University has estimated that since joining the European Union, trade between the UK, a net-importer, and the rest of EU has increased “Britain’s GDP by 8-10%.” Free trade achieves this by improving the efficiency of resource use. This is explained by the law of comparative advantage, first theorised by David Ricardo in 1817. This law states that even if a country has an absolute advantage over another country in producing a certain good (i.e. it is able to produce this good at a lower opportunity cost), it is better off importing this good if it frees up resources for production of another good in which it has an even greater absolute advantage over the other country. This means that even if a country has an absolute advantage over another country in the production of every good, trade between them will still increase welfare in both countries by allowing them to specialise in producing goods of the lowest opportunity costs for them and, with additional revenue gained from increased exports, import other goods for cheaper than they themselves can produce them for. The view of free trade as a zero-sum game between net-exporters and net-importers is often referred to as Mercantilism and is based on the false assumption that trade surplus is always right and deficit always bad. In reality, trade surplus does not always translate into more prosperity, because prosperity, by definition, is the breadth and the variety of goods consumers are able to purchase. Exports increase welfare only indirectly: exports increase aggregate demand, so lead to a higher real national income and, as a result, increase the purchasing power of domestic consumers to buy goods, most of which are nowadays imports. If trade liberalisation leads to a trade deficit, but also a reduction in prices (which we have shown that it does) and unemployment (which we have also demonstrated that it does), prosperity will increase.

This essay has shown that free trade is not only necessary but also beneficial on aggregate and in the long run. Free trade decreases unemployment, reduces income inequality, increases producer and consumer welfares, benefits both net-importers and net-exports and decreases the likelihood of war. Anti-trade rhetoric has made a resurgence as protectionism is a more instinctive, albeit incorrect, approach to solving economic problems globalisation has brought about. Whereas benefits from free trade are difficult to understand and are concentrated only on particular demographics, the short-lived benefits from protectionism are immediate and visible, especially when the anger of workers, who lost their jobs when their employers were forced out of business by foreign firms, is stocked up by nationalist rhetoric of power-hungry politicians. Many of these politicians understand the benefits free trade brings, but are lured by the rent-seeking behaviour of powerful industries. Instead, these politicians should be focusing on distributing the benefits of free trade fairly among the population. The great Milton Friedman once declared that “the economics profession has been almost unanimous on the subject of the desirability of free trade.” The dismal science is not wrong on this one.

Nurasyl is interested in behavioural economics and econometrics. Outside of Etonomics, he has founded TEDxEton and runs the school's Visionary Society. View all posts by Nurasyl Shókeyev

One thought on “Please, Mr Trump, free trade is not evil”